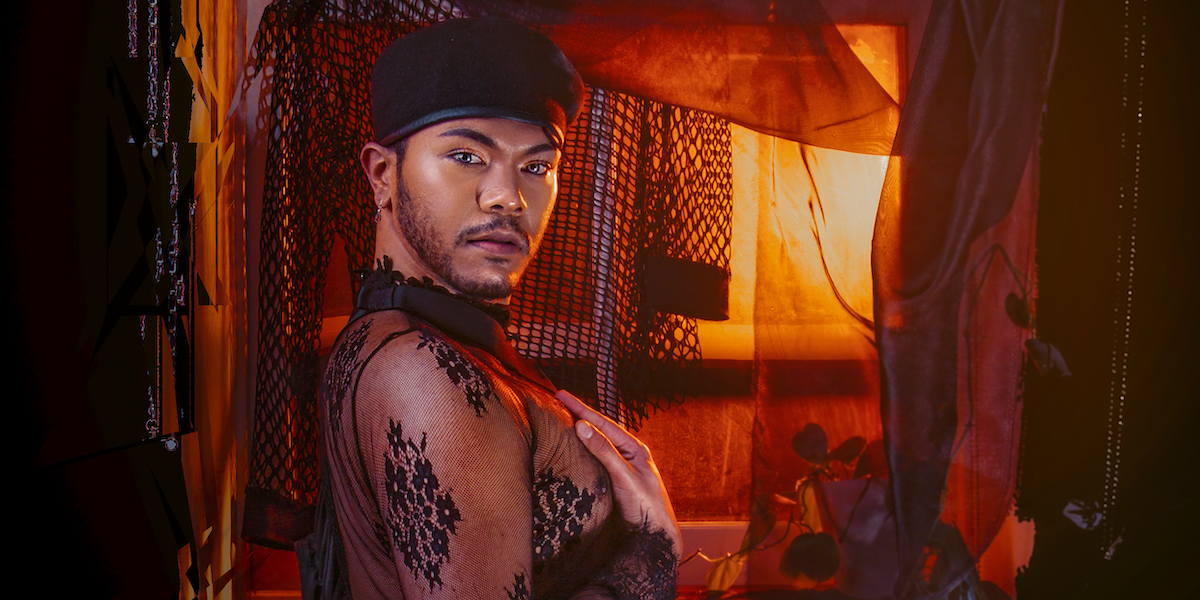 I walked into the grungy concrete bunker of Basement Theatre to see ‘HEtheyShe’ – the premiere of a new solo work by non-binary, BIPOC (Māori/Samoan), poet, performance artist and movement artist, Cypris Afakasi – and wondered where the best seating was going to be. I wanted to be smack bang, right up in there, in loving exchange with this artist – themselves a founding member of the arts collective Coven and the House of Coven – Carangi. Have I mentioned that this was part of the 2021 Pride Season?

It is a warm evening, and it gets hotter throughout the night. I bring my fan, a way to regulate my own temperature – a good idea as it turns out.

The performance begins with us surveying the staging, simple, stark. A small riser with a chalk outline of a body, two side changing screens with various clothing pieces draped. The brick wall of the venue is dimly lit. We enter into this world, like we have wandered into someone’s constructed reality – which it is. Soon after, a voice speaks in the darkness behind us. Yes breaking the fourth wall. I appreciate that it is and will be an exploration of the expectations of the space. I assumed as much.

I KEEP THINKING ABOUT THIS PIECE AND WHY IT ARTISTICALLY AND POLITICALLY EXCITES ME.

The performer occupies the space, and dramatically it is a blur of how to distinguish the ensuing sections. Time/space normalities are ripped apart a little. I can remember being in a torrent of house music, familiar and not familiar tunes, a swirl of projection mapping that uses their brown body as part of the canvas. There are sequences of dressing and undressing, changing of gender, nothing is normalised, we slowly get used to the morphing nature of the performance.

Cypris is a brilliant dancer. They acquire the language of ball culture, vogue and use it in ways that subvert the genre (if you can call it that). Their musicality is off the hook, intuitive and inspired. I see so much in their physical becoming, it is a shedding, a revealing. Fast hand movements in blue gloves, adjusting to the way their body is an entity in its own cosmos of creation, spinning, dipping, death dropping. All the while, keeping their eyes firmly transfixed on the viewers, mesmerisingly so. As they sweat, their skin glistens, softens, reflects, and shares.

In the middle of the performance, I start thinking about what it is, where it could be shown, what could add to it. I was genuinely excited thinking of all the possibilities. I was aware of the resources it had (community, aroha, connection, snaps, sass) and the resources it could really use (capital, space, better lighting and recognition beyond its own community/form). I saw the star potential and quality of the performer, the ways in which this work is innovative in ways that are missed in the mainstream space. I was more curious and leaned in.

Throughout the performance, some things are abundantly clear. One, is that the performer is relentless in their pursuit. They rarely stop moving, which is impressive. They meander between scenes, between props. They wear fishnets, and hooker boots and masks, and they lip synch, pose and play with whips and make sexually suggestive movements. And I am there for it. The audience respond at times, the performance defies boundaries, so we sit in a non-binary audience / performer space too.

There is a heartfelt reading about a family member, and some poignant moments that punctuate the dance discourse. It is deeply personal, abundant and generous. Some of the interactive moments were challenging to the gaze, the witnessing, a turning inside and out. I keep thinking about this piece and why it artistically and politically excites me, from a point of view of shifting paradigms and exposing other measures of success.

I send a shout out to Cypris for this offering, it is fantastic and refreshing. Snaps to Moe Laga, collaborator and support. To Cat, Nisha and the Basement whānau, thanks for your mahi. To everyone else, go see the show. Go support our local queer brown superstars. Go support our small performing arts venues.