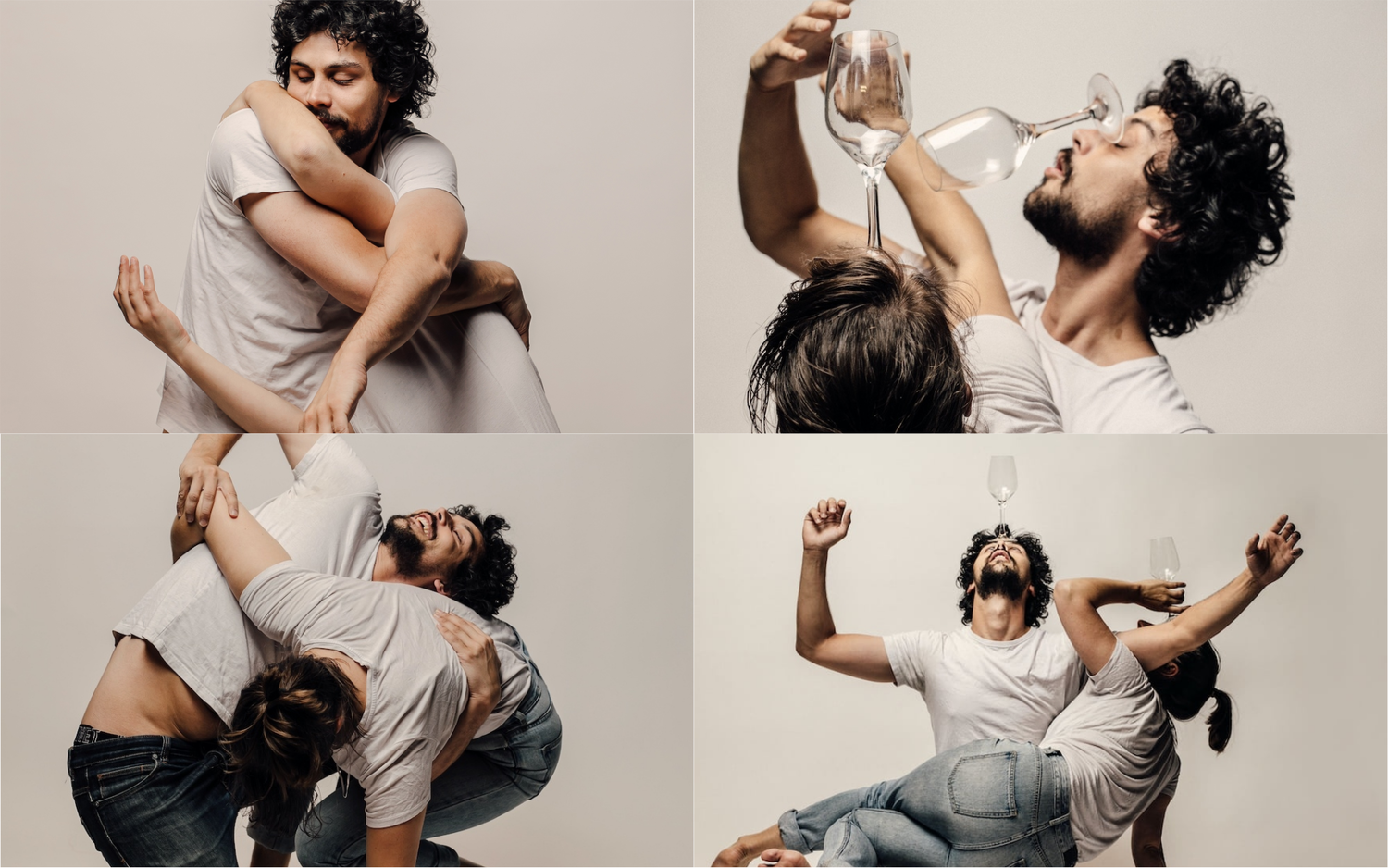 The collective accomplishments of the creative team are pretty significant. For those unlucky enough to be unfamiliar with their work, here’s a quick summary:

One of the key creators of Body Double, Jane Doe, and Yes Yes Yes, Karin is one of our leading discursive feminist theatre-makers. There’s a certain clarity and directness in the way she speaks as a performer that makes you sit up and listen. There’s nothing showy or attention-grabbing about her presence on stage. It’s deeply understated. But it’s also levied by a warmth and gentleness that’s hard to describe. It’s these characteristics which made her so perfect for what is essentially advocacy theatre centred around sexual consent and social change.

If you don’t know Meg’s work well, she’s one of the leading performance designers in the country. You’ve probably seen her work without realising it. Just to name a few: Burn Her, Medusa, Working on My Night Moves, Yorick!, My Dead Best Friend. Her work is conceptually driven in a way that Basement Theatre doesn’t often have the luxury to experience. As one of the original minds behind Standard Acts, her performance design is more than just building a set, but conceiving of how the show itself might be put together dramaturgically.

Director Julia Croft is a Basement darling. Very few other artists have had such a big impact on Auckland’s theatrical landscape - at least in terms of influencing and galvanising artists like her (though there is no one quite like her). It’s difficult not to view all the solo work that has come after Julia through the lens of her own experimentation. I can’t describe the feeling of complete bewilderment and joy I experienced the first time I watched her perform If There’s No Dancing, only potentially bettered by the second time I watched it.

She’s since moved onto bigger and bolder experiments, consistently questioning the form of theatre itself, in an ever evolving practice that always offers up something new.

One of my favourite actors. Deeply watchable and infectiously joyous, he’s also a beautiful body to watch move through space, all limbs and elasticity. He’s such a good traditional actor that you almost can’t believe he’s such a fun mover and audacious experimenter either. That this is the same person who shapeshifted effortlessly in The Court Theatre’s The Events (which Meg also designed!) as well as sat persistently dialing up strangers in Just One More astounds me.

After several hiccups and postponements since its Wellington premiere was cancelled last year, the much anticipated Standard Acts is finally here. Let’s not only be excited for the fact that we’ve been theatrically edged this whole time, but also for the fact it has allowed the creative team more time to develop the work. Julia notes that this is effectively “the fourth iteration of the show” that we’ll be seeing. It’s exciting to see what art that is literally made during and throughout the pandemic looks like. That the work itself becomes an act of resilience.

No, not professional wrestling, but the Greco-Roman kind.

The question of whether wrestling is real or not, is the same question one could apply to theatre. It’s play pretend, but it doesn’t mean it’s not real. Theatre can hold multiple truths at once. It’s wily like that.

Wrestling, like theatre, is a spectator sport. Like theatre, it is something of a fixed match. The audience can influence the vibrations in the room and the particulars of a performance, but it is ultimately a predetermined outcome, right? It’s this tension, or ambiguity, that drives why we watch. At what point does the performative end and the authentic begin? I know I’ll be watching closely to try and figure it out.

“We both know when we need to breathe in the show. How much space to take up. A sensitive line to walk. I feel that Arlo has a really good understanding of his body and what his body is doing in space. I never feel worried that he’s gonna go way too far.” - Karin

There’s a particular sense of excitement that arises when two performers, like Arlo and Karin, who circle around the same sphere of theatrical experimentation finally collaborate. With that chemistry also comes a trust though. “Adversarial but not violent,” as Karin puts it. They’re charismatic and watchable on their own, but when you put them together… It’s like a clash of the titans.

When Karin and Meg first conceived the show, when MeToo first began to happen, Karin had a very clear idea of what she wanted: “I want this to be a two-hander and I want the other player to be a man.”

Arlo is a male. Karin is a female. Those two facts have an inherent dramatic tension to them. There is a story here. These bodies tell a story. These bodies have history that reaches far beyond just Arlo and Karin. You can’t avoid that. Pitting male versus female against each other is inherently dramatic. It’s about power.

“A love letter to being in proximity of another body.” - Julia

“It felt radical to be all over each other and sweating on each other. Knowing that so much of the world is incapable of sitting in the theatre and seeing their loved ones.” - Karin

I still remember the shock of hugging someone for the first time after lockdown first ended, the warmth and jolt of it surging through my entire body. In our socially distanced times, physical touch is one of the most intense lacks. The love language we are most inclined to suffer without. To live in social distancing and isolation is to live deprived of intimacy. Intimacy, is for all intents and purposes, what theatre offers that no other medium can. A sense of physical intimacy and proximity. Standard Acts takes this to the extreme. This is not a show that can be compromised by level 3 or more. Sorry Zoom-lovers, this one is all about contact. There’s no show if they cannot engage. There’s something almost forbidden and sexy about a show that should not be able to exist but simply does. It is easy to take this for granted, especially in a country that has been relatively uscathed by the consequences of this pandemic.

One of the devices of Standard Acts is the repetition of 8 rounds of wrestling between Arlo and Karin. I’m reminded of Basement’s 2020 Fringe provocation to make durational theatre, which Arlo was also involved in. Karin, too, has a passion for this form, going back all the way to her love of UK-based company Forced Entertainment. It’s an interest spilling out into this process of this show. Duration and endurance as live art. While Standard Acts is not a durational piece of theatre per se, with 8 rounds of wrestling it plays with these notions of endurance, exhausting the bodies of its performers. It’s these feats of strength that are exhilarating and tragic all at the same time.

What happens to an audience when asked to sit in a repetition or duration for a long period of time? What do we as spectators discover and experience? It’s a deeply masochistic experience. One that is hard to pull your eyes away from, watching the endurance fatigue of a performer both physically and emotionally. As Karin says: “It asks the audience to surrender to what they’re experiencing in the room.”

An evolution of the task-based practice of theatre and live art work, this might be the most stripped back show the team has made so far, reducing the act of theatre or live art to a series of tasks, wrestling and storytelling. Julia says it has a “purity and simplicity that reveals an enormous amount of complexity. In task-based theatre, everything else falls away.”

“When we made it originally, we were angry and tired. But then the pandemic hit and perspective hit. I don’t want to spend any more of my energy being angry.” - Karin

As a minority body, rage is one of my favourite subjects and feelings. It’s one of the still truly subversive traits to inhabit, because it is simultaneously so exhilarating and exhausting. It’s rude and unlawful. It’s defiant and an act of reclamation. But it’s also exhausting. Standard Acts actively wrestles with rage and rage fatigue. What happens after rage?

For the seriousness of the form and content, these makers are very funny people. The storytelling provides a break from the repeated wrestling. The makers promise levity and comedy, calling it “pseudo-stand-up.” A way for us to consider power in a different way. Is it the person who makes you laugh more? And, even within the wrestling, there is an inherent clumsiness and joyfulness. As Karin puts it: “Sometimes it’s silly and awkward trying to navigate each other’s bodies.”

Aesthetically and sonically influenced by a retro aesthetic, including a boom box on stage, what more could you want? Expect an early 90s stanky punk gig vibe. And a playlist with some fantastic bangers:

Though back briefly for Pride and Fringe, for most of us it’s been a while since we’ve really had the pleasure of sitting at Basement Theatre. For Julia, she was planning to move to Glasgow and only returned because of the pandemic. She says it “feels like coming home to something.”

There’s a particular feeling the space captures, the feeling that anything could happen there. That this is where you go to make something bold. For Meg and Karin, it might not be home, but there’s a sense of putting on a show here to “finally fulfil the thing they’ve wanted to do.” The visceral excitement and charge of a bunch of “sweaty bodies in a sweaty little theatre.” A little bit gross, yeah, but also kinda fucking fantastic.